Note: yesterday's update broke several clients. If your client is no longer working, please go to our Play page to download a new client.


Today, a couple of bugs have been fixed, some that were introduced in yesterday's update, some that have been present for longer.

First of all, the hitpoints bar in the top-left corner will no longer overlap with any visible timers (from potions, veng, barrage, ...), as the timers now automatically shift down whenever the hitpoint bar is visible. In the future, we might add the ability to freely drag the hitpoints bar anywhere on the screen, but hopefully this solution should suffice for now.

First of all, we have performed another major cache update to bring our cache up to date with the latest version of OSRS (that is, as it was on 23 June 2021), allowing us to implement any of the new items, NPC's, locations or other features that OSRS has introduced in the past year.

There is a very real chance that this cache update will lead to strange bugs, such as wrong NPC's, unwalkable tiles or objects that you can no longer properly interact with. Please report any bugs you find in our bug reports forum so we can fix them as quickly as possible.


While trading, you can now offer all the items from your inventory with a single click on the "Offer all" button. 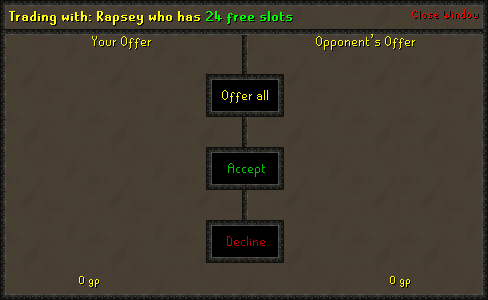 Apparently, this was already suggested and accepted by us 7 years ago, but this item on my to-do list got lost to history until very recently


There is now a hitpoint bar overlay in the top-left corner of your screen, displaying the current and maximum hitpoints of your opponent while in combat. This applies to both PvM and PvP. The opponent's hitpoints are not updated when they eat or heal, only when they are hit.
This overlay can be toggled off in your ::settings, but is enabled by default.

You can now press the "TAB" key more than once in order to quick-reply to a different player (starting with the most recent person who talked to you in PM). Once you reached the last person in the list, pressing TAB once more will make you reply to the most recent PM again.

When hitting an NPC with a whip of fortune special attack, you will now see a visible overlay above the NPC's head to indicate it has been marked and will have a 1% bonus drop chance on death. We made sure this icon would not interfere with other overhead icons, such as protection prayers. 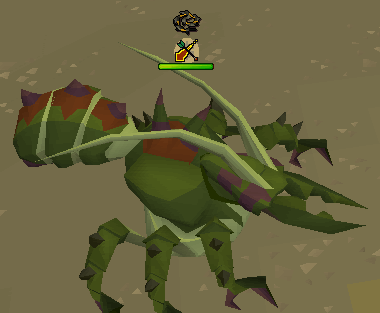 If you are not attacking anyone, should you always be able to see who's attacking you?

Someone recently complained that while in the wilderness, they are unable to see whoever is attacking them when a whole group of players is piled on top of each other and one of them is attacking you: viewtopic.php?f=67&t=82940. According to some, this is also how it works in OSRS.

As you may know, when you are following/attacking another player, that player will always be shown on top of everyone else on the same tile. However, the same does not apply when being attacked.

The question is: if you are not following or attacking any other player or NPC, should you be able to see whoever is currently attacking you by always showing that player on top of everyone else?

I have implemented a hitpoint bar overlay as suggested in viewtopic.php?t=82999 (see image below), but I was wondering if this should also apply to PvP. Players will be able to toggle this on or off (it'll be on by default) and it might be quite an advantage to see the exact current and max hitpoints of your target, rather than a rough visual indication through the HP bar above someone's head.

To clarify, the shown hitpoints only update each time your opponent is hit, not when they eat or heal in any way.

Let me know what you guys prefer.

There is one reason for this, and one reason only. Which is that I wanted the Nex pet to be something truly special. Yet time and again, I kept postponing this decision, putting it off because I just couldn't figure out how to make it into something special, or simply forgetting about its existence altogether.

It's about damn time this stupid pet is released already (you can hate me for it all you want, I don't blame you at all). But I still struggle to find the answer to what exactly I should do with it, and in which manner I should bring it into the game.

That's where our loyal community comes in. Dozens of brains are better than just one set of brains, so here we go. Let's discuss this and have this darn thing released in our next update (as long as it's not being made too exotic).

As such, we need to the answer the following questions: Before you ask: we will not give Nex any PvP perks. Outside PvP, feel free to suggest your own perks or QoL features related to the pet. The more ideas, the merrier.
Powered by phpBB® Forum Software © phpBB Limited
Black Style by Arty