Thanks to the input of @Bert and @Nazuths (in this bug report), I managed to fix a couple of other pathing bugs, mostly related to ranged and magic attacks:
Two bugs with the rune pouch have also been fixed:

Welcome everyone to today's update! It has been a little while since you have heard from me, but today I am bringing a fair share of new and exciting content. In this update we would like to further improve the UIM experience, explore existing content and add a bunch of QoL additions. As always, grab a snack and see what today's update brings!


New / Updated Items
Lets start with some new or updated items that are included in today's update:

Armadyl's Grapple
The Armadyl's Grapple is a new custom items that is dropped from the Saradomin GWD boss.
It is a magical grapple that allows players to cross the gap in the Armadyl godwars dungeon, while having it in their bank.
This makes it so you can save an additional inventory spot when venturing into Armadyl's lair.

Mirror shield
A mirror shield is now required to defend yourself from the Basilisk Knights.
It can be purchased from any Slayer store for 800 Slayer points, requiring 20 defence and 25 slayer to wear.

V's shield
Alternatively, you can also use V's shield to defend yourself from the Basilisk Knights.
It has higher melee bonuses than a mirror shield, but negative ranged and magic bonuses.
It can be purchased from any Slayer store for 800 Slayer points, requiring 20 defence and 60 slayer to wear.

Ancient Effigies
Ancient Effigies have gotten several improvements.
First and foremost, the experience gained from the Effigies has been doubled for all skills except Construction.
This makes it more worthwhile to use on other skills than before.
Additionally, handing in any skilling pet at the Pet trader now rewards players with an effigy.
Finally, the skill-selector interface was updated to include the Hunter and Construction skills.

Smoke Battlestaff
The Smoke Battlestaff is a new reward that can be received from the chest at the Thermonuclear Smoke Devils. When worn, it provides infinite Air and Fire runes.
It can be further upgraded to a Mystic smoke staff for 250 PkHonor Points by using the right-click option in the inventory.


New pets
We hope you like them! Read all about the newly added pets below.

STASHer's Unit
A new NPC can be found just northeast of Varrock square, the STASHer! The STASHer is very good in stashing away some of your clue items and will gladly help you store some of your darned treasure trail items to save bank or looting bag space.
Talk to him to unlock your STASHer's Unit for a small fee of 400 PkHonor points! 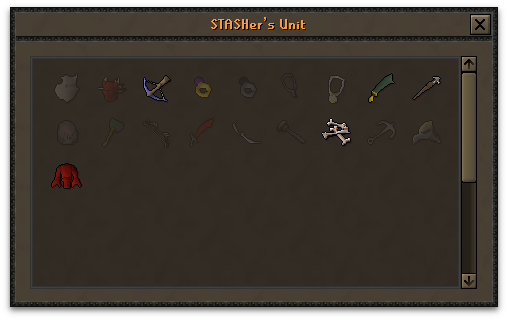 Remember those pesky clue steps where you have to talk to a specific NPC and bring some specific item?
Well, you're in luck! The STASHer is also very popular around PkHonor, so he might be able to tell the Wise old man and the Estate agent about all the items you have stored in his unit. This prevents you from having to retrieve the items from the STASHer altogether! He will only do this for a one-time fee, of course...

We had noticed a few odd lines of code in the pathing code and fixed those, which should hopefully fix some of the issues that our players had been experiencing since the last pathfinding update from 23 April. Please let us know if there is still anything off!


Glacors
However, we recognize that some of their mechanics can be quirky at times.
We tried to improve the general experience with the implementation of the Tome of fire, but this didn't really solve any of the underlying issues.
As such, we decided to briefly revisit the Glacor mechanics and solve the main problem: the Enduring Glacyte.

We also solved the issue where Glacytes would get stuck in surrounding objects. This should no longer happen.

To celebrate these latest changes, we added a new unique drop to the Glacors to spice up their droptable.
Proudly introducing: The Baby Glacyte! The Baby Glacyte is an ultra-rare drop from the Glacors and can be morphed into four different looks, representing the Glacor and the three Glacytes.
This was a requested addition and we absolutely adored how the little guys looked, so hopefully this new pet will make your Glacor trips even more worthwhile.

Barrows
Barrows is one of the longest existing minigames on PkHonor. The minigame is an absolute classic, and we want to celebrate its existence by further expanding on the rewards. Introducing; Barrows pets!

The little buggers will be available from the Barrows chest with a 1/150 chance, and will also be dropped by the brothers in Risky barrows.

The 'Counting on it' slayer perk, which made the 'Log' option on slayer items open up the Kill count book, has been replaced by the 'Courageous soldier' perk.
The 'Courageous soldier' slayer perk costs the same amount of Slayer points, and ignores the combat level of the player requesting a slayer task- thus making it possible for pures to get any Slayer task (if they have the correct Slayer level, of course).


Ultimate Ironmen Experience
With the removal of the Refund box, Ultimate Ironmen are in a tough spot. I think many will agree that the game mode hasn't gotten the attention it should have.
We want to fix this, and would like to focus on the overall UIM experience. The STASHer's Unit could be seen as the first step in the right direction.
The implementation of the STASHer's Unit also came with a shiny new framework for item containers, which can be reused to introduce new item containers in the near future!

Aside from players (including UIM) being able to retain clue scrolls on suicide, UIM players now also have the abilty to box and unbox items at the Item Set Exchange Clerk. This will hopefully help save some much needed inventory/looting bag space.

We would like to reach out to our dedicated UIM community and hear about their feedback and personal experience.
What additions you would like to see in the future? What could be improved upon to make UIM more enjoyable?
Feel free to discuss your ideas on the forums, and I'll gladly join the discussion!


Keyboard QoL
Some QoL changes have been made to make certain actions more accessible:

OpenGL sneak peek
As some of you might have seen in our Discord, we have been working on implementing OpenGL.
Implementing OpenGL will make it so PkHonor can run on the GPU (your graphics card), adding a range of new possibilities to how we render and design the game and generally increasing the performance.
It provides increased viewing distance, higher FPS and the ability to add filters (like bloom, anti-aliasing and more).

Adding OpenGL is a complex challenge, and I am glad to say that we managed to implement it for the biggest part already.
Currently it is still not entirely stable and has several known issues, but we are working hard to perfect it.

As some of you may know PkHonor first went online sometime in May of 2008. The exact date has been lost to history, so traditionally we consider the entire month of May as our birthday month. This year we're blowing out 13 candles. Pretty crazy! If PkHonor was our child it'd probably be visiting websites in incognito mode by now.

To celebrate the fifth month of this year we've decided to hold five double XP events for all skills, one for every Sunday of the month!

Thank you for helping to keep PkHonor alive for so long. Enjoy!

I'm glad to announce a number of pathfinding improvements to issues that have been an annoyance to our players for years. A huge thank you goes out to @Iron adam, @The Underdog, @Brant, @Crimson king and all the others who provided me with the input I needed to know what the issues were and how to reproduce them.
Not all pathfinding-related issues may be fixed just yet, but it should definitely be another major step in the right direction. If we have missed any pathfinding bugs, if new bugs are introduced because of these changes or if some changes did not result in the expected behaviour, please let us know.

One of the improvements (properly running up to an NPC that is walking away from you) required us to change the order in which attacking and movement are processed. Normally, this should not result in any issues, but if you notice any adverse combat-related side effects because of this change, please let us know as soon as possible.

In other news: Last but not least, after several months of little to no progress, the Vespula room has finally been fully implemented! I can with some confidence say that Vespula may not only be the most hated Chambers of Xeric boss in OSRS, but also the most hated boss to properly implement in PkHonor. On to the next room: Vanguards!
Powered by phpBB® Forum Software © phpBB Limited
Black Style by Arty